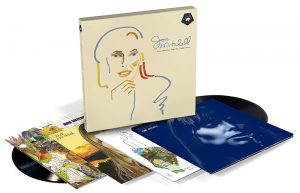 On June 22, 2021, between 1-4 PM EST, host Lisa Sahulka will dedicate her show, Afternoon Jazz with Lisa Sahulka, to a celebration of the 50th anniversary of Blue by singer-songwriter, Joni Mitchell.

The anniversary is marked by the release of the next installment in the Archives Series, where Joni Mitchell offers remasters of her first four albums.

Song to a Seagull, produced by David Crosby, was recently remixed by Mitchell and Matt Lee. “The original mix was atrocious,” Mitchell said. “It sounded like it was recorded under a jello bowl, so I fixed it!”

The Reprise Albums arrives on June 25th as a four-CD set, as well as a four-LP limited edition limited to 10,000 copies.

The cover art for the box set (adapted above) features a self-portrait by Mitchell and liner notes written by Brandi Carlile. “In my opinion, Blue is the greatest album ever made,” she wrote. “Blue didn’t make me a better songwriter. Blue made me a better woman… No matter what we are dealing with in these times we can rejoice and know that of all the ages we could have lived through, we lived in the time of Joni Mitchell.”

Joni Mitchell has received many accolades, including nine Grammy Awards and induction into the Rock and Roll Hall of Fame in 1997.