“The Greatest Radio Station in the World” is the title of a new documentary film about radio station WPKN, located in Bridgeport, Connecticut.

WPKN began as the University of Bridgeport’s college radio station in 1963. It has been operating as a listener-supported, community-based radio station since 1989. There are only three paid staffers…the General Manager and the Operations Manager are full-time, and the Office Manager is part-time. All of the Programmers are volunteers.

The film, by Cob Carlson, will be carried by this cast of characters, as well as the listeners, station volunteers, and DJs from the past. We will hear interviewees share their personal, idiosyncratic stories, speaking passionately about their love of music, news, politics, health, cars, organic gardening, space exploration, and culture.

Like the radio station, this film will be fearless, boldly independent, free form, and unconventional. WPKN prides itself on being a real alternative to an increasingly homogeneous broadcast radio landscape. It enriches the lives of their listeners while promoting diversity, tolerance, and freedom of expression.

It is a story worth documenting.

Save the date for the Gala reception and viewing of the documentary: Saturday, June 25! 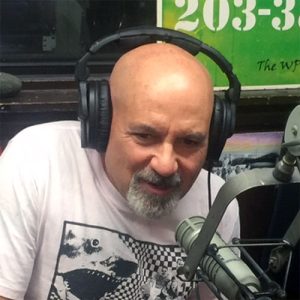 Cob Carlson
Cob Carlson was born in Bridgeport and grew up in Fairfield. Cob has been a film editor/producer for thirty-three years, the past thirty spent in Boston. Cob has worked on documentaries, feature films, major network television programs, music videos, trailers, commercials, and web videos of all kinds. He is currently an Adjunct Professor at Eastern Connecticut State Unversity.

His 16mm documentary film, “An Irish American Story,” about his grandmother who lived in the South End of Bridgeport, received critical acclaim and was broadcast on PBS in 1998. He recently produced the feature length documentary “Donald Ross: Discovering the Legend.”

His passion for storytelling and film has culminated in a brand new feature-length documentary about WPKN, which is in the final stages of post-production.