Adele Stan, Director of People for the American Way’s Right Wing Watch project, talks about Donald Trump’s refusal to condemn White supremacists during the first presidential debate, and instead blamed “Antifa and the left​” for violence, while asking the Proud Boys to “stand back and stand by.”​ She’ll also discuss Trump’s refusal to agree to a peaceful transfer of power if he loses the election, the threat of violence by his supporters at polling places on election day, and possible efforts to stop the vote count in battleground states in the days that follow.

Doug Henwood, journalist, economic analyst, author and host of the nationally-syndicated KPFA Radio show, “Behind The News,” assesses the nation’s ongoing unemployment and economic crisis, inaction by the Senate on relief legislation — and the enormous job of repair and policy correction that will be required after the election, and post-pandemic.

Luis Luna talks about the programs he produces on WPKN Radio, “Melting The Ice” and “Resilience Behind the Walls.” He’ll also discuss his work at the CT Working Families Party where he serves as the group’s Field Director. 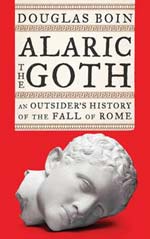 Writer’s Voice with Francesca Rheannon will talk with historian Douglas Boin about his fascinating biography, “Alaric The Goth: An Outsider’s History of the Fall of Rome.” It’s a cautionary tale about how xenophobia and anti-immigrant bigotry led to the Sack of Rome and the fall of the Roman Empire.

Then we hear from Jim Walsh of Food and Water Watch about legislation proposed by AOC to ban fracking.