Rockers Arena with Amy Wachtel airs every other Friday from 1 p.m.-4 p.m.

Lots of Roots Classics and Conscious, Rasta Music of the ‘70s and ‘80s are featured alongside newer music with Positive, Mindful, Truth & Rights, Get-Up-Stand-Up, Revolutionary, One Love and Spiritual Messages. Punk, New Wave and other Rebel or Uplifting Music is often mixed in.

There’s a Facebook group called “Rockers Arena with the Night Nurse,” where “members” of the Rockers Arena Massive and Crew meet up to exchange musical updates, videos, news and information. During the broadcast, regular listeners frequently post in real-time about the songs and topics being played and discussed. Anyone is encouraged to share on the page. One must answer three simple questions pertaining to Reggae Music in order to gain access.

In the name of Unity, Oneness, Hope, Healing and Gratitude, there’s generally a point in the show where a meditation, poem, prayer, affirmation or some uplifting words of Inspiration are offered.

Most of the music played on Rockers Arena is basically from the Night Nurses’ personal collection of vinyl records and CDs. As an “old school” DJ, Amy rarely plays digital tracks. Every other week, she comes in from her native NYC armed with bags of LPs, 12’s, 45’s, CDs and even the occasional cassette. 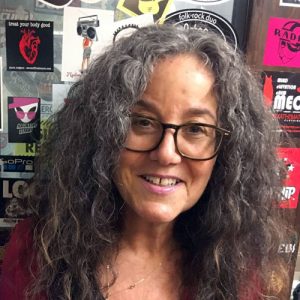 Amy Wachtel
Amy joined the WPKN air-staff in March of 2018. She’s spun at the Music Mash Record Fair at Read’s Artspace in Bridgeport each year since.
Learn More