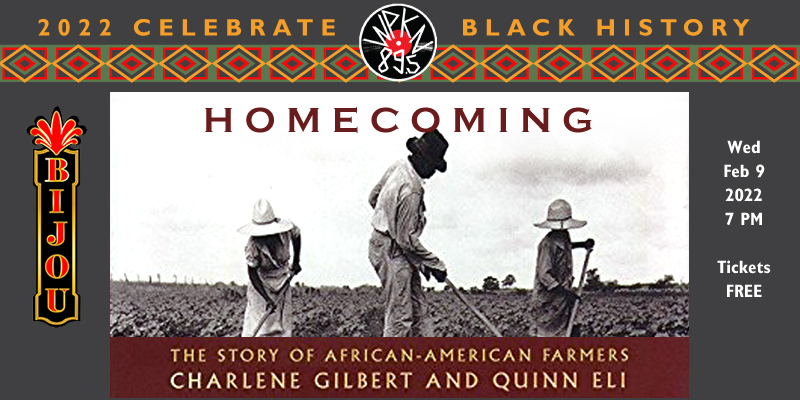 Homecoming: The Story of African-American Farmers

Homecoming is the first film to explore the rural roots of African American life. It chronicles the generations-old struggle of African Americans for land of their own which pitted them against both the Southern white power structure and the federal agencies responsible for helping them. Director Charlene Gilbert weaves this history together with a fond portrait of her own Georgia farming family into what she calls, “A story of land and love.”

Like so much African American history, the Black farmers’ story is one of perseverance in the face of prejudice and perjured promises. As part of radical Reconstruction, Congress allotted 45 million acres of land to former slaves but the rapid reimposition of white supremacy meant that little land was ever actually distributed. Despite formidable obstacles, one million African Americans, mostly former sharecroppers, managed to purchase over 15,000,000 acres of land by 1910.

This achievement was threatened by the agricultural crisis of the ‘20s and ‘30s that led to a raft of farm foreclosures and, eventually, to the system of federal farm loans and subsidies on which all farmers depend today. But the U.S. Dept. of Agriculture was a white man’s club, often working hand in glove with local bankers and big landowners to dispossess Black farmers of their land. For example, during the ‘30s the Southern Tenant Farmers Union had to force the Farm Security Administration to include African American farmers in their tenant purchase program. It was through this program that the filmmaker’s grandfather purchased his land, the farm her cousin now owns. Black farmers are currently suing the U.S.D.A. successfully for discriminatory loan practices over the last three decades. As a result of these policies, there are only 18,000 Black farmers left in America and it is predicted there will be none in the next century.

Homecoming, is also a mediation on the unfinished work of redeeming the land African Americans worked as slaves for hundreds of years. August Wilson once asserted that African Americans are a rural people who, after the Great Migration, found themselves in an alien urban milieu. This film argues that Black farms, though small in number today, can continue to provide African Americans with a sense of cultural stability and family unity into the 21st Century. In a country that has never tried to make African Americans feel at home, this film, like the farming families it celebrates, offers a real “homecoming.”